Skip to content
Lately, I’ve been noticing that through my forty two years of marriage, three daughters and too many moves, I’ve accumulated a lot of stuff. I move it around, dust it, occasionally look at it, but I don’t use most of it anymore. It’s just my stuff.  My mother in-law is a hoarder in the true sense of the word. Now, she’ll tell you the reason is that she grew up during the depression and she never wants to “do without” again. It would be nice if that were all it was.  Unfortunately, like most hoarders, the real reason was tragedy. After losing her youngest to a drunk driver, she’s gotten rid of nothing, and I do mean nothing. 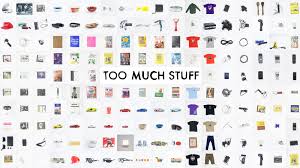 The really strange thing about all of the thoughts about my stuff these last few months is that a documentary appeared on my Netflix search called Minimalism. I didn’t search for it, neither did my husband. I thought, maybe my visiting youngest did. Here for her baby shower, we had the conversation about not buying the baby a lot of stuff. She doesn’t need it. But no, she didn’t search for it either, even though I tried to thank her for it.   I’m going to go with benevolent forces helping me out!

Both my husband and I have vowed for years now, not to keep things like his mother does. Still, over time, you do keep a lot of stuff. Nostalgia? Maybe. Laziness? Sometimes. I think the most likely reason is habit. It’s always been around so why get rid of it now. It has memories, the kids might want it. Wrong! They don’t, I asked them. They think most of it’s junk.

Here’s my solution: Divide and conquer. And I start this weekend. Sure, there are a few things that belonged to parents and grandparents that, because it means so much to me, I want to pass them down. So my idea is to take those things, photograph them and email an explanation of who it belonged to and what it means to me, to each of my kids. Then, I’m going to let them choose what they honestly want to have. I’m going to give whatever it is to them right away. I may ask the nieces and nephews if they would like anything that’s left at an upcoming reunion.
After that, I will need to honestly evaluate. Is it useful to me, do I love it or is it just here? If it’s just here it’s going on Ebay! Seriously, it’s just stuff. I have fond memories not to mention the DNA that my ancestors gave me. I certainly can’t take it with me, so I might as well get some value out of it.

We’re at an age where retiring is just around the corner. I’d love to move to a little two bed, two bath cottage in a rural setting. I’d like to have less stuff to move and clean. I’d like to enjoy the people I love and experiences more than living with all this stuff. Anyone else feeling the same? I’d love to hear your ideas and solutions.  Cheers!